I saw a table top crime scene lab for Forensics and I thought that is what I am doing this year instead of setting up half my room as a crime scene and risk kids moving things.  Most of the examples I saw and read about the teachers made all the crime scenes and the kids measured and drew the rough sketches and final sketches from the teacher's crime scenes.  Well, I thought, why not have the kids create the crime scenes too?  Because most of them will be crap... that is why.  So disappointing.

Several groups didn't provide an aerial view which made it impossible to draw a sketch with measurements ... I had them switch crime scenes with another group to do the sketch.  Well, after the nonsense that ensued trying to figure out how to make it work, my co-teacher decided to have his groups make the rough sketch from their own crime scene.  The groups who did a good job had a very easy time, and the ones who didn't follow directions quickly figured out why it was important to do so.

Several people did good jobs.  most were paper, but this group below chose legos for their crime scene.  I love the lego blood.. 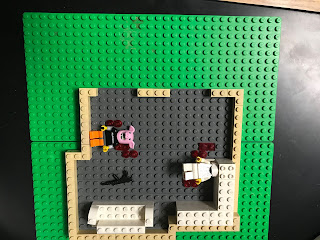 Another problem we ran into was my freshmen kept touching things - especially with the lego crime scene.  I lose it a bit, when kids touch things that are not theirs, this year my freshmen don't seem to recognize that some spaces in my room are off limits.  Next year I guess I will have to put crime scene tape up!
Posted by Sandy at 10:25 AM