Today was pH day in AP Biology!  So a million years ago I made this really simple worksheet/practice sheet for my AP Bio kids.  Today the kids did awesomely!  I would love to tell you that this is because of my amazing teaching ability... but it's about my classroom dynamics at this point.  So the kids took notes last night (from a video I made at least 4 years ago), and they had questions about how to determine the pH, Hydrogen ion concentration, and hydroxide ion concentration.  So we worked a couple of problems together.  Some kids caught on quickly, and a few weren't there yet.   So I took this opportunity to discuss proper ways to help peers.  I reminded them that they have all had the same classes with the same teachers, most of them for a really long time.  So sometimes it is more helpful to have a peer reword it for you because you speak the same language. 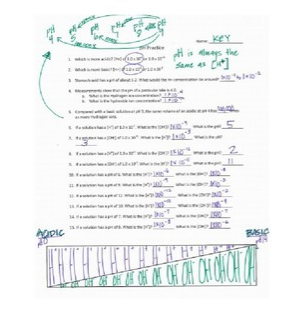 I have listed the worksheet and the key in our Teachers Pay Teachers Store: pH Practice.

What do you do to help your kiddos understand pH?
Posted by Sandy at 8:50 PM 2 comments:

So when you ask a room of 9th grades what they know about the mitochondria there are approximately three responses: blank stares, light snoring, or "the powerhouse of the cell."  Nope, not in my classroom.  When I first started teaching I was ecstatic with that powerhouse answer, and I even did the project where the cell is a city and they have to come up with analogies for organelles as parts of a city ... once.  I didn't feel like they understood what ANY of it meant.  For example, when I asked them "what does a powerhouse do?"  blank stares, more light snoring, and someone trying to get on their phone ... nothing.  So they don't get to say that in my room.  They have to have an answer that has to do with making ATP.  This has officially reached ridiculous levels this past year with my band students including AP Bio and Freshmen Bio students.  It started small and built quickly to the point that it was mentioned in a speech at graduation.

The other organelle that I fight is the nucleus.  I have two issues.  When I ask "what is the nucleus of a cell?"  I get a few responses: blank stares, light snoring, "the brain" or "it's where the protons and neutrons are."  So after eye-rolling and thoughts of day-drinking (just kidding), I make sure we go over the differences in the nucleus of a cell and the nucleus of an atom.  Then once we are focused on cells the only answer I will accept has to have something to do with containing DNA. I focus on the DNA being instructions for activities, but the nucleus doesn't select for or against activities. The kids don't fight me as much on this one.

If this is what you teach your kiddos, I don't want you to feel like I am judging you, or creating any negativity, it's mostly about me being so wacko due to teaching freshmen for approximately one million years ... what was I saying?

Do you have any pet peeves or anything you are particular about in your classroom?
Posted by Sandy at 8:59 PM 4 comments:

So this post has been three years in the making!

My school has a 30-minute tutorial class built into our schedule. Students can go to classes as needed and get help or they are assigned tutorials if they fail a grading period.

As it gets closer to our Texas End of Course Exam, the administration requires that all Algebra 1 students be assigned tutorials to review for the EOC. Over the last three years, I have developed mini-lessons to review big topics. I have designed and redesign each worksheet and I am finally releasing them to the world.

Individual lessons can also be purchased on We Teach High School's TPT page. 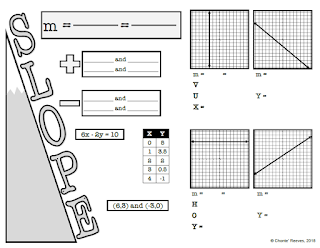 You can download a free copy of the Slope worksheet from TPT.