What is your favorite teacher T-shirt, mug, etc?

This may be one of the most truthful teacher T-shirts I have seen.... 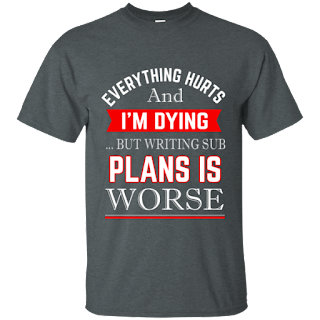 I lost one of "my kids" over Christmas break.  He graduated last year.  He was my teacher's aide and spent at least 2 if not 4 hours a day in my room.  It hurts, and it hurts when his friends come in and visit it hurts to see them in pain.  It is not fair that they have to experience this loss at such a young age.    But what helps is talking to them ... and seeing our little community rally around this family.  It is awesome.

He was supposed to stop by for a visit before heading back to the Air Force Academy ... he questioned me with each piece of Air Force flair I had (that my kid was given by a recruiter).  And now each of those pieces feel tied to him.  He forced me to clean my desk completely every couple of weeks.  He liked to stick around and talk about whatever was going on in his life or just shoot the breeze.  He passed his AP Exam and has a star on my wall with his name on it.  I just realized that the geologic time line up in my room may have been from his group during his freshmen year.  I will always picture him sitting near my desk with his mischievous grin ...

And though we cry, and the tears will still come sometimes when we least expect it, he would not want us to be sad.  He would want us to support his family, get our acts together, accomplish all we can, help those we can, and take comfort that he died doing what he loved.

In addition to being a rockstar teacher, a not-so consistent blogger, wife, mom, sister, and daughter, I am also a Director with Pampered Chef.  I only bring this up because I just got back from a leadership retreat.  As with all new events I was apprehensive.  But it was awesome.  And I now wish that teachers had something available to them that was so informative, uplifting, fun, and revitalizing.  There were about 25 of us in 5 suites.  We took up one floor and had one suite one floor up.

We filled out forms ahead of time as to what we needed from the retreat.  We had a scavenger hunt, a craft project, a guessing game about the other participants, gifts on our pillows, and a secret admirer.  We had a expert panel from within the group, we had some therapy, and we had a lot of laughter.  Enough that we need to be able to be as loud as we want!

Would you want to come to our teacher retreat (if we can figure out how to make it work)?
Posted by Sandy at 6:42 PM 2 comments:

I have been challenged to write every day.  Why would I take that challenge on?  Because I love this blog.  There is so much I would like to share and reflect on, but I am often pulled in so many directions that I forget what amazing things I wanted to write about.  I figure even if I can't publish a post every day, at least I am doing better than I was.  So, get ready.  We are about to get silly, get real and get random.

I am going to write about activities in classes, my composition book of memories, losing a student, what to do when you have a sub, December Spirit days, gifts to students and gifts from students, the proper way to spend winter break … and everything else I think of!

Now, any ideas what I should write about?  I have a few ideas, but if you like our little blog and want to hear something specific comment below and let us know.
Posted by Sandy at 9:43 PM No comments: