For the past five years my students have been creating amazing ceiling tiles that remind us of what we need to know.

Unfortunately I got bad news two days ago.  Apparently the Fire Marshall said they all had to come down ...

I loved having these reminders up without feeling like my room was wallpapered with student work.  So now I am trying to come up with a new way to display visual reminders like this!
Posted by Sandy at 2:06 PM No comments:

What Do You Want Your Legacy To Be? 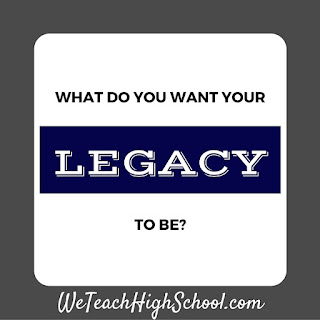 This year my father is retiring.  He has taught and coached for 42 years, and the last 33 has been in the same school district.  He had the most amazing retirement party I have been to.  The stories that were shared and the amazing amount of people that showed up on a Thursday afternoon were so touching and a testament to the service he provided to the school and community.

As his family we have always given him a hard time about the large number of ex-students and athletes that approach him and talk to him and he sometimes has no idea who they are. But after only a few years teaching the names started getting jumbled, and now we all understand.  But his name and his presence has stuck with so many of those that he taught and coached.

My father taught math, driver's ed, PE and coached volleyball, football, basketball, tennis, bowling, cross country, swimming and diving.  He also has taken countless co-workers and athletes fishing and taught them ... well, probably a few choice phrases.  As teachers we learn so much from our students.  One of my memories was that one of his students taught him to french braid hair, so if our hair was ever french-braided growing up, it was his handiwork, mom didn't know how.

And the pool he has coached at for the last 30 years is now named after him.  That meant so much to my family, but the stories that co-workers, ex-athletes, and ex-parents shared will live in our hearts forever.

The things that stuck with me were how he worked to include kids in his programs, how many kids he trained as lifeguards and hired to give them their first job, how he saved many of them from a path that would not have been as good on the one they are on now, how he was patient (for the most part) while putting up with the nonsense of teenagers for 42 years, and how his faith transcended all that he did.

I have always admired my father, and it is nice to know that others appreciate and admire him as well.  So now, how will you be a positive influence on as many lives as possible next year?