Do your students like to try to argue with you?

I went through an alternative certification program to become a teacher.  I had taught at colleges, and therefore was a little better armed than some of my cohorts.  As part of my alt. cert. program I had to take a course on classroom management.  I had the luck of having an instructor who had worked in some very tough school and went off-script from the ESC's  PowerPoint.  And thanks to that I walked away with some very valuable advice.

The most important and most point was not to argue with students.  I think the saying goes "Arguing with a teenager is like wrestling in the mud with a pig.  Sooner or later you figure out they are enjoying it." 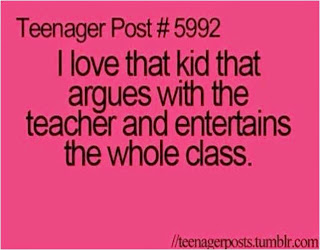 The more you argue the more they know how to push your buttons .. and the more it becomes a game.  When you teach high school, it is easy to get drawn into an argument.  You can feel it happening.  You are the adult.  You are the authority figure.  You don't have to argue.  Stop it.

I recently read a parenting blog where the mom said she used the phrase "asked and answered."  It seems to me that phrase could apply to my classroom almost as often as to my home.

What are your best strategies for students who want to argue with you?